By Date
By Movie
Tickets
שלום 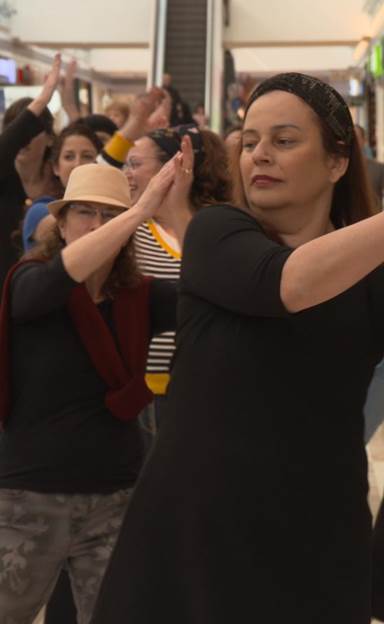 Dance reflects on identity; identity that is both individual and social, that holds within it meaning, history, and testimony. The choosing of this theme stems from an overlap found between dance and cinema - both forms of art that derive from the society within which they exist. The films will present the cultural fabric, rich as it is complex, of life in Israel, while voicing as well pain and protest. Each of the films will demonstrate their creators’ perspective on Israeli life, and will constitute a channel for cinematic and personal expression. As a whole, the films make a mosaic of a multi-layered society whose various sections share dance as a means of expression.

Gadi King of Israel
Israel 2018
Documentary
Hebrew
When he raises his hands, thousands of dancers move to the rhythm of his footsteps. The folk dances that he has composed have become canonized in Israeli folklore. Gadi Bitton, the indisputable leader of the greatest Israeli dance culture, receives not artistic recognition. This is a portrait of a king, the son of a Rabbi, after whom crowds of dancers are carried away.
Director, screenwriter and cinematographer: Ido Weisman Producer: Yael Perlov, Hadar Masasa Editor: Shauly Melamed Participant: Gadi Bitton

Flashmob
Israel 2018
Documentary
Hebrew
Six years ago, Miri Shalem and the women of Beit Shemesh went performed a flash mob in the center of the city, protesting the story of eight-year-old Naama Margolis, who was spat on by ultra-Orthodox extremists, on her way to school. Miri continues to act against the exclusion of women in the ultra-Orthodox city. Today, she is embarking on a journey to create a new flash mob dance, while its subject is more relevant than ever: the presence of women in the public sphere.
Director and Screenwriter: Hila Chessen Cinematographer: Maayan Blech Producer: Yael Perlov, Hadar Masasa Editor: Yael Perlov Cast: Miri Shalem, Liat Amar, Yona Morgenstern, Orna Nachmany, Ruthie Berkley, Alisa Coleman, Tali Samuel
The Steve Tisch School of Film and Television in the University of Tel-Aviv

Nur
Israel 2018
Documentary
Arabic, Hebrew
Nur Morse is an 18 years old Arabic boy from a small village in the north of Israel. From a ur Mursi is an eighteen-year-old Arab boy from the village of Makar. He has been dancing Dabke from an early age, when at the age of 14 he saw a ballet performance for the very first time which opened his eyes and drew him in to the world of ballet. Today, Nur wishes to make a precarious change in his life, and realize his dream of becoming a dancer. On his way, he must deal with his family, the demanding world of dance, and above all, himself.
Director and Screenwriter: Ori Birgerb Cinematographer: Shai Skif Producer: Yael Perlov, Hadar Masasa Editor: Yael Perlov Cast: Nor Morse, Rabeah Morkus Saleh Shami, Naomi Perlov